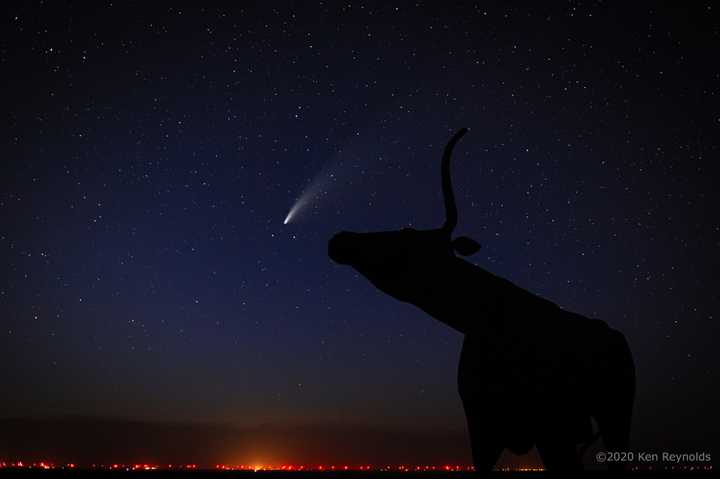 Last weekend I took full advantage of the opportunity to embark on a short road trip to Throckmorton, TX, located about 3 hours west of the Dallas/Fort Worth Metroplex, in order to see and photograph Comet NEOWISE. For anyone who loves viewing the night sky in all of its stardust glory this area, occupying a small footprint in Northwest Texas, is one of the best places to do so. The only light pollution around is from the nearby wind farm and, as you can see in the photo, it is minimal at best. By an hour after sunset I was able to clearly see the comet, as well as the Milky Way galaxy and a sky littered with bright stars, galaxies, and planets (something that is just not possible in the ridiculously light-polluted skies of the Metroplex).

Unfortunately, Comet NEOWISE has begun to fade from view, not to be seen again from Earth for another 6,800 years. Regardless, photographing the night sky is a lot of fun and provides ample challenge, even for the most seasoned photographers. In order to capture Comet NEOWISE, I used the following gear and settings:

If you plan to use similar gear for your own night sky photography then the settings above will serve as an excellent starting point. Having said that, while 50mm was perfect for capturing the above scene with the comet, if you are serious about doing astrophotography on a regular basis, I would highly recommend that you buy a fast wide-angle lens, such as the Samyang 14mm f/2.8 manual focus lens, so that you can capture more of the sky in the frame, as well as utilize longer shutter speeds. In fact, this is a purchase I plan to make for myself in the very near future. Another piece of kit that is essential for serious astrophotography is a star tracker (which I also plan to purchase soon), such as this SkyWatcher Star Adventurer kit from Amazon. This will allow you to take a series of photos to stack without the added worry of star-trailing, if that’s what you prefer. And that’s all you really need to get started with capturing your own images of the night sky, including the Milky Way and other starscapes.

Thanks for visiting and have fun on your own photo adventures!

Ken lives and works in Dallas, TX. He chases storms, landscapes, and cool urban scenes across North America. He is always looking for adventure in uncivilized places.

When not chasing light, Ken is probably slinging code as a Sr. Front-end Developer in the airline industry, listening to music, playing ham radio, or spending time with his beautiful wife and daughter. He is easily bribed with pizza and killer craft beer.